In order to celebrate the 99th anniversary of the founding of the Communist Party of China, at the same time, encourage party members of the branch to not forget their original intentions, be courageous to take up their duties, strengthen their ideals and beliefs, and strengthen the cultivation of party spirit, on June 29th, the party branch of Greatoo (Guangzhou) Robot and Intelligent Manufacturing Co., Ltd. responded to the call for joint training of party members of the "Red Alliance Co-construction" group, organized company party members and the activist, remote video link Gaoxinxing Group party class site to learn "Spiritual Speech by General Secretary Xi Jinping and the Spirit of the Two Sessions", and participated in the themed party class activity. The party class was taught by Professor Wang Yuyun, deputy director of the Party History and Party Construction Department of the Party School of the CPC Guangdong Provincial Committee. 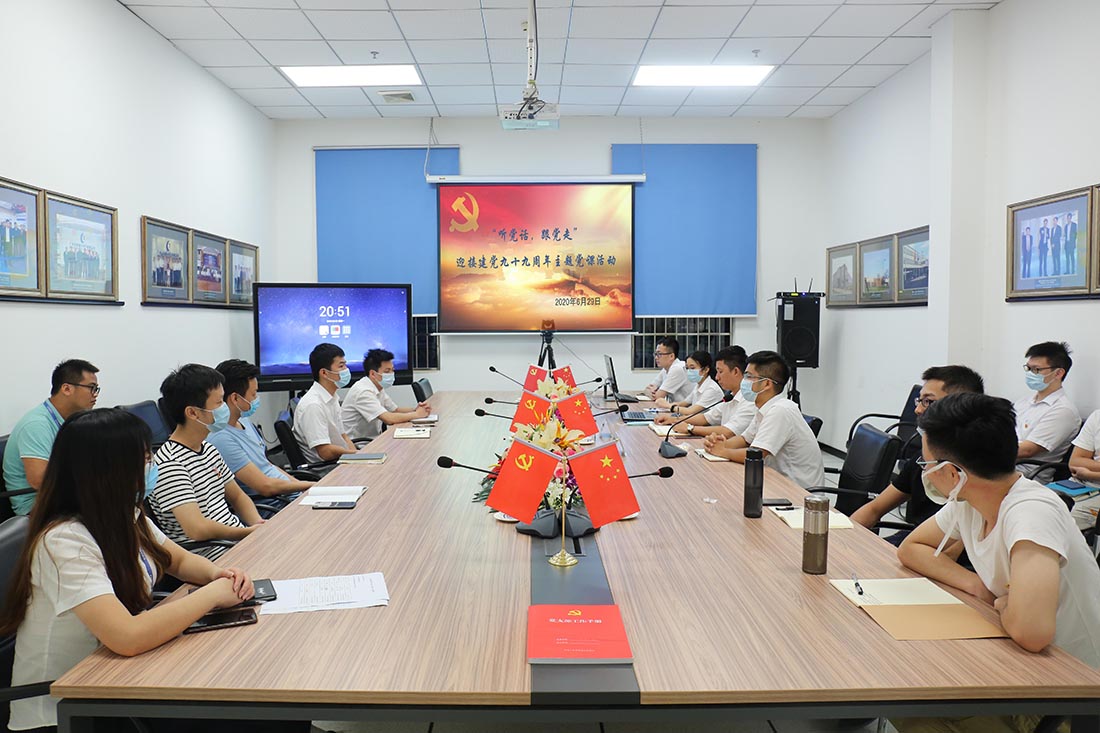 In the class, professor Wang Yuyun introduced the spirit of General Secretary Xi Jinping’s important speech when he participated in the deliberations of delegations from various regions, vividly explained that General Secretary Xi insisted on analyzing the current economic situation with a comprehensive, dialectical, and long-term perspective, and working hard to develop new opportunities in the crisis. The important guidance of "opening a new game during the change" calls on party members and cadres to have full confidence in "bringing up new opportunities and opening a new situation", work hard, and open up new horizons for development. In addition, professor Wang Yuyun also explained the 2019 government work report, in-depth analysis of the current situation at home and abroad, and encouraged party members and cadres to study seriously, always be consistent with the party organization, be brave and act well, and play a pioneering role.

After the party class, our party branch secretary Hong Runlong said: In the face of the new era, new journey, and new tasks, we must always take Xi Jinping’s socialism with Chinese characteristics as a guide in the new era, with a high degree of political consciousness, strong responsibility, and the spirit of dedication, to carried out various tasks in a down-to-earth, pragmatic and efficient manner. Party branch members must be firm in their confidence, dare to be first, play an exemplary role as party members, create value and contribute to society and enterprises.

Subsequently, the company's party members and activists made statements. Wu Fan said in his speech that since the outbreak of epidemic, we can see that party members and cadres bear the brunt and fight for the front line, guarding life with life, reflecting the social responsibility and a great virtue. It is hoped that members of the party branch will continue to strengthen the cultivation of party spirit and play an exemplary role. Yang Shengrui made a brief report on the work of the branch, and called on the party members of the branch to actively participate in the company's party building work.

Since its establishment in December 2019, the Party branch of Greatoo (Guangzhou) has actively participated in the party building activities organized by the city and the district. On the eve of the 99th anniversary of the founding of the party, it visited the Xinhai Revolution Hall with the party committee and various branches of the park to revisit the party history and exercise party spirit; actively respond the call of the Ministry of Industry and Information Technology to establish the "Red Alliance Co-construction" team with seven companies including Gaoxinxing Group. Through the integration of resources, the party organizations of all co-construction units can jointly build, share positions, co-organize activities, jointly train party members, solve common problems, and achieve win-win cooperation. In the future, the Party branch will continue to implement the requirement of "sticking to arm the whole party with Xi Jinping's new era of socialism with Chinese characteristics", promote party members and cadres to strengthen "four consciousnesses", strengthen "four self-confidences", achieve "two maintenances", and promote high-quality enterprise development with high-quality party building.